In the last game of the year against Griffith the Wagga Tigers AFNC Inc celebrated an enormous achievement by Andrew “Horse” Priest in breaking the long standing most games played for the Wagga Tigers. The previous record of 422 games held by club legend Gerald Pieper has stood since the year 2000 and looked untouchable to many people. However, with Andrew’s unwavering loyalty and commitment to the Tigers he was eventually able to achieve this magical milestone.

Andrew started playing with Wagga Tigers at the age of 8 where he played all his junior football with some highlights being involved in a couple of junior premiership teams, winning under 15’s best and fairest and ‘Junior Tiger of the Year’ in 1991, before moving to the senior club in 1992.

Horse actually made his debut for the Tigers senior club in 1991 by playing 4 games in the under 18’s, and in 1992 he was fortunate enough to be part of the under 18’s premiership side, and also took out best in finals.

In 1993 at the tender age of 17 years old, he trained hard and played sensation football at full forward to be part of the 1st Grade Premiership Team coached by Terry Daniher. Although he unfortunately missed out on the 1994 premiership side, he returned to the 1st Grade side for further 1st Grade premiership glory in 1995, 1997, 1998, 1999 and 2001. During those years he represented the RFL on many occasions, was awarded best in finals twice (1997 & 2001) and in 2000 was runner-up B&F.

Andrew was also an integral part of the Wagga Tigers participation in Canberra League competition from 2002 to 2006, where he continued dominant the position of Full Forward, CHF, Ruck and give his all for the Wagga Tigers during these years, whilst many other players came and went.

On Wagga Tigers return to the RFL in 2007, Horse was able to play his 300th game and again would be a massive part of his last 1st grade premiership side. He continued to play 1st grade football over the next few years until 2011 when he reduced his commitment and started playing with a more social attitude to football. However, success continued to follow him as in 2011 he was in the 2nd Grade Premiership team, won 2nd grade best and fairest, and leading goalkicker after playing only 8 games.

At the conclusion of the 2011 season Andrew was bestowed by the Wagga Tigers AFNC Inc with its highest honour of being awarded title of Knight of Tiger, previously only presented to two other players in the history of the club.

He continued to play the odd game for the reserves in the 2012 & 2013 seasons, before returning to play a full season in 2014, break the 400th game barrier and once again be part of the 2nd Grade premiership.

Whilst again entering into semi-retirement in the next couple of years until this season where he once again strapped on his boots to play the new Tigers club record of 423 games, one thing is certain Andrew’s attitude, commitment and loyalty to Wagga Tigers is a legacy that will remain long after he decides to hang up the boots for good.

All together his 423 senior club games, have culminating in seven 1st Grade, two 2nd Grade and one U/18’s premierships and is only one of four Knight of Tiger ……. not a bad effort Horse. 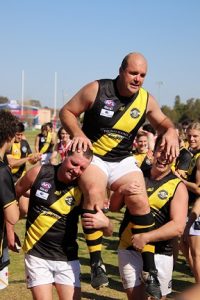