It is hard to know where to start with Wimpy’s stories as he lived such a full and colourful football life. Many stories true and false, controversial, bold, loud and never dull but most of all a true and dedicated Wagga Tiger.
Wimpy came to the Wagga Tigers from Culcairn in 1965 as assistant coach. He also coached the under 17’s for three years for three premierships. Many of the players use to rib him that he only came on grand final day to get the glory.
Wimpy then went umpiring for about the next 10 years – but he always turned up at all Wagga Tiger after game and social functions. Along with wife Ros, they were heavily involved in the Junior Club as sons Murray and Clay moved through the grades.
The building of the club rooms also saw Wimpy heavily involved and the partnership of Wimpy, Ted Ryan and Robert ‘Gunny’ Hughes will long be remembered by all at the club as the best entertainment you could ever wish to experience – arguments, verbal abuse, fun, laughter and a few beers and Wimpy was always right in the middle of it all.
In 1984, Wimpy took on the job as President and immediately took the club from the bottom of the ladder for the first time in the club’s history – and the only time so far. In true Wimpy style he gathered his committee and went on a recruiting drive and at the end of 1985 Tigers held up the 1st Grade Premiership Cup – not bad from the bottom to the top in 12 months.
Wimpy stayed President for seven years in which the club was always at the top but just could not win another premiership.
The club rooms will be forty years old in 2019 and for more than 60% of that time Wimpy held the bar licence on behalf of the club – a remarkable service to our club.
There are not enough pages in this book to list all the achievements Wimpy has done for the Wagga Tigers club but there is one thing and that is he would not have achieved what he has done without the support and help of Ros.

Wimpy is a life member – the Tigers bar is named in his honour – a true Wagga Tigers LEGEND – thanks for the memories Wimpy. 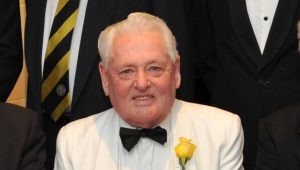