Shaun comes to Tigers from Ballan after a brilliant season last year. Shaun Campbell took home the Geoff Taylor Medal in Central Highlands Football League Best and Fairest vote count. With a total of 34 votes Campbell’s tally is the second highest total in a single season throughout the league’s history.

He comes to us with fresh ideas and loads of enthusiasm.

Campbell has warned “Teams will play against Tigers a bit different next year”.

Shaun is starting with a pre-Christmas pre-season and makes no secret of what he wants from Tigers.
“Just working on getting them fit. Speed kills as far as I’m concerned.” Campbell said.
“Even though they are really young and pretty fit, we need to be able to run all day. Being littler, if we can run all day we’’ be able to run these bigger bodies off their legs which I think is what they did last year.”

But Campbell’s most excited about the opportunity to coach a team on the rise and sounds as though he’ll pick up where Rava left off in terms of playing style.
“I’ve always wanted to coach and I couldn’t help but jump at the chance. I just love the young playing group – blokes full of enthusiasm and keen to get amongst it.
“We’re going to play a pretty quick brand of footy, with the speed of the young fellas. Just a go, go, go type of footy.”

The committee has also been lucky enough to secure two new quality players from the Canberra competition who will bring a fresh playing style to our club and enhance the already talented playing group that will see Wagga Tigers through 2016. 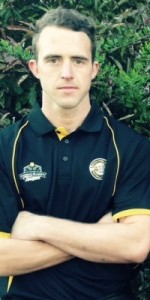 Wagga Tigers committee welcome these new players to our Club along with all existing players. We look forward to a very exciting 2016 season.